Founded as North Cornwall Golf Club in 1891 the club was originally intended for the exclusive use of the officer class incomers and local gentry with the exclusion of the local townsfolk. An exception to this rule was made for open champion Harry Vardon when visiting the club in 1905, 1907 and 1909. The last visit saw Harry reduce his own course record from 69 to 65.

The growing demand for locals to play the game resulted in the formation of an artisan section in 1919 called Bude Town Golf Club. These artisan members carried out work on the course and were not admitted to the clubhouse and had restricted playing rights. From 1949, North Cornwall Golf Club and Bude Town Golf Club merged to found the present club.

The Origins of Bude and North Cornwall Golf Club

The idea for a golf course at Bude appears to have been formed in the minds of young, affluent professionals who were drawn to Bude as holiday visitors in the late nineteenth century. Cricket and tennis was already being played in the town and the addition of a golf club would have provided a further attraction. The clergy as well as lawyers particularly seemed to find the summer sports at Bude attractive. It is quite likely that some were renewing friendships formed at university in earlier years.

The early minute books of the club have been lost but there is evidence to suggest that the club was inaugurated in 1890 as the Bude Golf Club. The original golf course at Bude consisted of nine holes and remained the same for the first two years. The Exeter and Plymouth Gazette of Friday 28th August 1891 reported that the greens were all levelled and re-laid during the previous winter and “are now well established.”

Evidence relating to the original architect of the course is not conclusive but almost certainly it was Tom Dunn. An historical description of Bude Links, written in May 1921 and included in the Western Morning News, states that Tom Dunn laid out the original course. This view is supported by Cornish and Whitten in their seminal work on golf architecture The Golf Course (1981). Tom Dunn (1849-1902) came from a family steeped in golf history. His father, ‘Old Willie’ Dunn was from Musselburgh and had played challenge matches against Allan Robertson and Old Tom Morris. Tom Dunn was born at Royal Blackheath where his father became greenkeeper and professional. Tom became a professional himself at the London Scottish Golf Club at Wimbledon in 1870. Tom became the most prolific golf course designer of his day laying out many courses, particularly during the 1890s.

The first professional golfer attached to Bude Golf Club would appear to be Alfred Jones Hobley.

This is an extract from the Royal Cornwall Gazette of Thurday 8th September 1892. 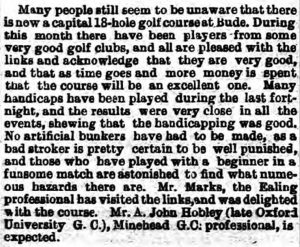 Alfred Jones Hobley is quite illusive in the historical record because of the various ways his name was recorded. He is variously recorded as Alfred Jones, Alfred Hobley, Alfred Jonas Hobley or even as above as A. John Hobley. Evidence from census and parish records would suggest that his father was a ‘Jones’ and his unmarried mother a ‘Hobley’. His route into golf came about through his mother who married Peter Paxton the professional golfer at the Worcestershire Club in Great Malvern. The Paxtons were another Musselburgh family with a depth of history in the game of golf. Hobley himself seems to have become something of a golfing entrepreneur. He was professional at Oxford University Golf Club in the late 1880s and later professional at Minehead and West Somerset and then Cheltenham. It is possible that he was involved in the original course construction at Bude, as suggested in the club’s 1991 Centenary History, or more likely, that he was involved in subsequent revisions and re-routings of the course.

The first members at Bude who helped to found the club were very much part of the professional ‘set’ who saw Bude as a place of sporting recreation and a family retreat in the spring and summer months. Younger family members of the esteemed author Sabine Baring-Gould were prominent in the early membership. In September 1891, Frank Carver, a solicitor from London, presented the silver medal for the first ever competition over the Bude links. In 1893 he married Leila Baring-Gould who was the half-sister of Sabine. In September 1892 Leila partnered her brother the Reverend Arthur Baring-Gould to success in the clubs mixed foursomes matchplay event. The clergy were very prominent amongst the early membership. The Reverend Ernest P Hebblethwaite, the vicar of Poundstock, became the first secretary of the club. The Reverend George Wingate was appointed vicar of Stratton in October 1892, perhaps drawn to the post by the newly established golf club at Bude. He had featured in the results of the earliest competitions at the club. The vicar of Bude, the Reverend Barton Reginald Vaughan Mills, was also a prominent club member. The results of some of the earliest competitions are shown below. 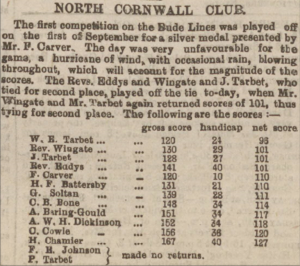 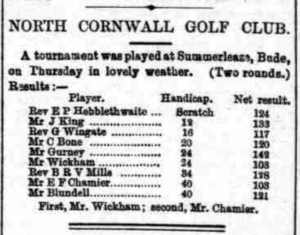 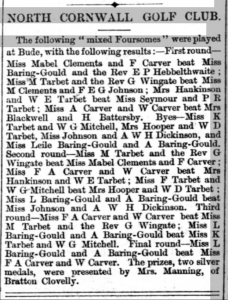 Women were very much golfing as well as social participants in the club from its earliest days. By 1892 a nine hole ‘ladies’ course had been established on the seaward side of the road to Poughill. The inclusion of the ladies course led to Bude being played as an eighteen hole course with the original nine holes being followed by the nine of the ladies course. The family dimension of the golfing experience at Bude can be seen in the early photograph below. 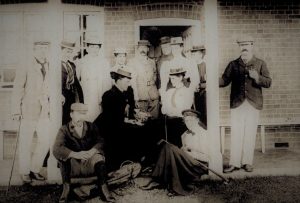 Early members on the veranda C.1900

From 1892 to 1894 the course was repeatedly altered and re-routed. The clubhouse seen in the image above was opened in 1895. Previous to this a tarred wooden structure had served as the clubhouse. This was located on sandy ground close to what is now the Co-op car park. The high tee of the present seventh hole would presumably have been the original first tee as served by this primitive clubhouse. From 1895 to around 1900 the routing of the course remained fairly stable. The boundaries of the course at this time were very different to today. For example, the seventeenth green was located near the flagstaff on Summerleaze. The final hole was played from near the flagstaff to what is now the fifth green.

Changes to the course were a feature of the early years at Bude, but a plan of the course from 1921 shows that it was contained within boundaries fairly similar to today. By this time the course consisted of eighteen holes with a separate nine-hole ladies course. 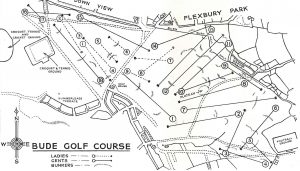 Evidence relating to the first professional golfers at Bude can be found in directories within early editions of the Golfing Handbook, the Golfing Annual and the Golfers Yearbook. The earlier mentioned Alfred Jones Hobley would appear to be the first professional, but it was likely he was only present for limited period. He may have been familiar to members through his association with Oxford University. Indeed that may well have been where some of the earliest members at Bude became acquainted with golf. The directories name the following attachments to Bude:- J. May (1893-5); J. Peardon (1896-8); W. Duncan (1899-1905); W.F. Rowe (1905-7); Jas.H. Hearn (1907-8); and T.H. Lyle (1909-36). The nature of these attachments to the club would appear to have been quite fluid and may have involved a variety of roles including teaching, club-making, supplying equipment, green-keeping and even bar steward. For example, census returns reveal that in 1901 James Peardon and his wife were resident in the clubhouse with their listed professions given as ‘Steward’ and ‘Stewardess’. The 1901 census also reveals that, at the time of the census, William Duncan was resident Golf Professional at Coldham Common, the golf course of the University of Cambridge. His lifestyle would appear to be similar to that of Alfred Jones Hobley, serving the golfers during term time at University and then moving to serve past and present students at the holiday golf courses that were becoming established at the newly developing seaside resorts.

Written by Rob Isherwood – Look out for more chapters on the history of Bude and North Cornwall Golf Club coming soon !

designed and built by Dean Wronowski

content writtten and design suggestions by the golf team